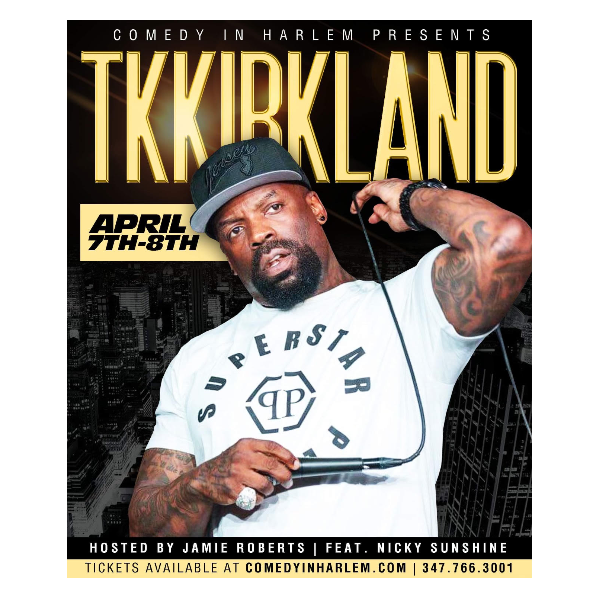 with Nicky Sunshine and Jamie Roberts
The Underground King of Comedy, TK Kirkland is coming to Comedy In Harlem Friday, April 7th, and Saturday, April 8th. Two shows each night. Buy your tickets now, because this will sell out.

TK Kirkland is an American actor, podcast host, businessman, and standup comedian. TK Kirkland is known for his standup comedy specials such as Are There Any Questions? and Who Raised You? and two comedy albums, including Are There Any Questions and Gangsta Conversation. He has also appeared in movies like New Jersey Drive (1995), Strays (1997), and The Champagne Gang (2006). 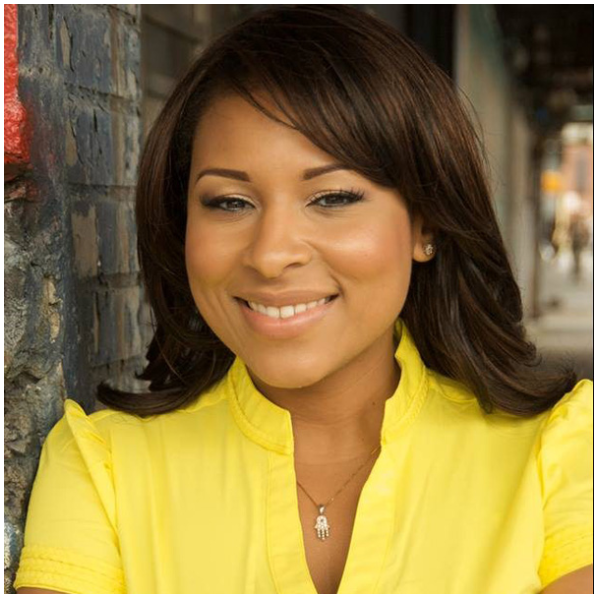 NICKY SUNSHINE blazed onto the New York Comedy scene as a finalist in Sal’s Comedy Hole competition in the West village™ Since then she has starred in and produced several comedy shows in major NYC venues like Times Square Arts Center, Broadway Comedy Club, Stand-Up NY & New York Comedy Club. Most recently she performed for COMEDY PIE™ PRODUCTIONS at Harrah's Casino in Missouri.

Much like her comedy, Nicky’s artistic journey has been colorful and unexpected. Born and raised in Falls Church, VA. as a high school student Nicky’s talents in communication were recognized with an internship at USA Today and scholarships to the prestigious Governor ’s School for excellence in Foreign Language. Upon high school graduation she moved to Caracas, Venezuela to study Latin American culture. Nicky Sunshine™ began her formal theater training at Northwestern University. While in Evanston she wrote and produced her own skits for African American Theater Ensemble. During her junior year she studied at Ludwig Maximilians Universitat in Munich Germany. While there she helped form the German based R&B group “KJ-19”. As a lead vocalist she landed a featured appearance on John “The Scatman’s” single The Chickadee Song. She graduated with honors in German Studies and International Studies from Northwestern. Nicky began her professional acting career in Washington DC, landing roles in productions at the Kennedy Center and the Smithsonian. She has appeared on the Martha Stewart Show, Saturday Night Live, and Si TV. Nicky has performed in numerous Off-Broadway productions including the acclaimed play by Linda Nieves Powell, YO SOY LATINA. She originated the role of Samana in the hit play PLATANOS AND COLLARD GREENS and most recently starred in THE VAGINA MONOLOGUES at the New World Stages Theater in NYC benefiting Womens Organization of Rebirth Through Healing, Women Are Dreamers Too and Women of Color Network. Ms. Sunshine also appeared in the Independent Film 'DIAMONDS IN THE RUFF. Nicky has been a professional improv artist for a decade. Her skills have been utilized by the US government to train managers in national security and scientists at the National Institute of Health. Ms. Sunshine’s unique presentation of characters won her an honorable mention in NBC’s Stand Up for Diversity competition. She has hosted numerous benefits to promote civil rights in the LGBT community.
Sure to blaze a trail in the entertainment industry, NICKY SUNSHINE™ has established herself as one of the most innovative female performers out
there today and as a major comic voice for women's issues. 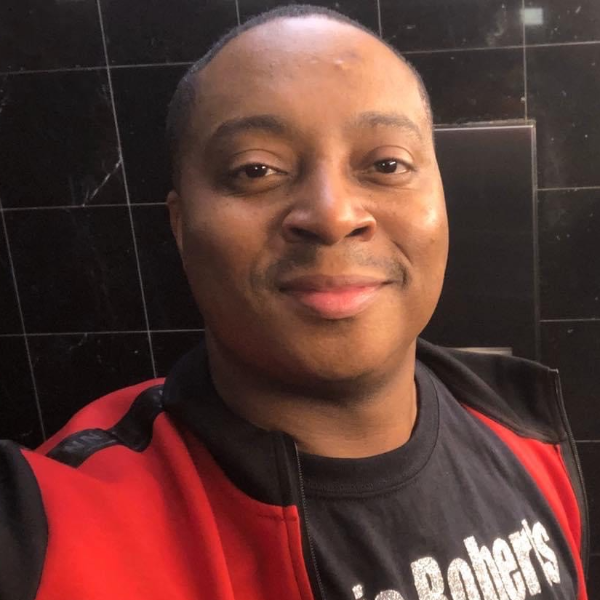 Born in Brooklyn and raised in Amityville, New York, Jamie gained an interest in comedy after being crowned ‘Funniest Person’ by his senior class in High School. It was then that he realized that comedy was where he belonged and hit the pavement convincing audiences one joke at a time. His first major win came at Stand Up NY, where he convinced the judges and won his next title, ‘Funniest Person from the Suburbs’. He continued pushing forward, making strides in the comedic world with performances in New York City Tri-state area, Hollywood and Atlanta. Jamie broke barriers by becoming the first non-Latino to produce the Latino Laughter Comedy Show at the New York Comedy Club. In addition to producing the show, he also hosted it each week. This experience opened the door to him producing a string of independent shows in the New York Tri-State area, as well as a national college tour titled “One Night Stand Comedy Tour”. The tour supported and educated students about safe sex through stand up comedy.

Since then, he’s wowed hundreds of audiences and has been featured on MTV, Tidal, XM Radio, The Grio, The Root and New York’s 770 WABC Radio. He added actor to his resume with roles in such popular shows and movies as NBC’s Law & Order and HBO’s Paterno, along with numerous commercials. He was even a featured cast member (along with his girlfriend) on the FYI Network’s A Question of Love and is now in production for their own follow up show. Presently, Jamie is the Executive Producer and host of New York’s longest running Sunday show, Sunday Night Live. He is also the Founder and Executive Director of Comedy With A Purpose, a business in which he uses comedy to address some serious social matters. Through Comedy with A Purpose, Jamie has helped raise funds for organizations such as Chicago Alliance Against Sexual Exploitation (CAASE) and Northwestern University’s Entertainment Alliance. There’s no stage too big and no feat unconquerable in Jamie Roberts’ world. With his clean-cut good looks, insatiable charm, and cutting edge comedy, he’s certainly the one to watch for.

Other Showtimes
The Underground King of Comedy, TK Kirkland is coming to Comedy In Harlem Friday, April 7th, and Saturday, April 8th. Two shows each night. Buy your tickets now, because this will sell out.

TK Kirkland is an American actor, podcast host, businessman, and standup comedian. TK Kirkland is known for his standup comedy specials such as Are There Any Questions? and Who Raised You? and two comedy albums, including Are There Any Questions and Gangsta Conversation. He has also appeared in movies like New Jersey Drive (1995), Strays (1997), and The Champagne Gang (2006).