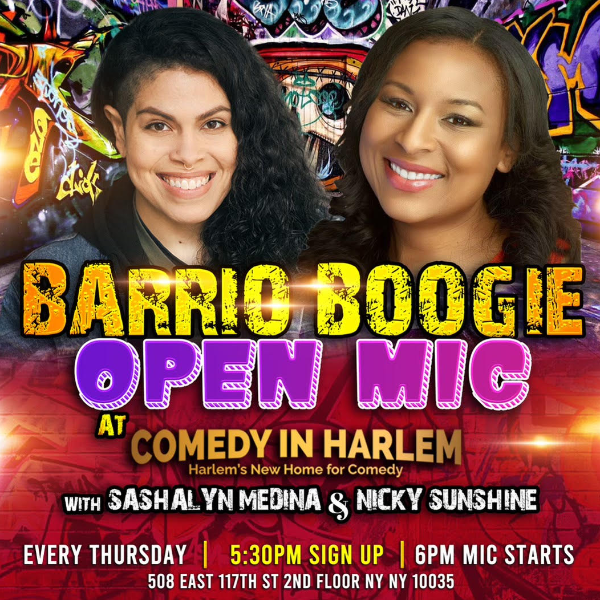 The Barrio Boogie Open Mic is the best mic to hit on a Thursday in NYC. Hosted by Sashalyn Medina and Nicky Sunshine, the mic features some of the best up and coming comedians on the NYC circuit. Make sure you stop in and see some great talent. If you want to perform, signup is at 5:30pm and mic starts at 6pm. Cost is $5 to perform. 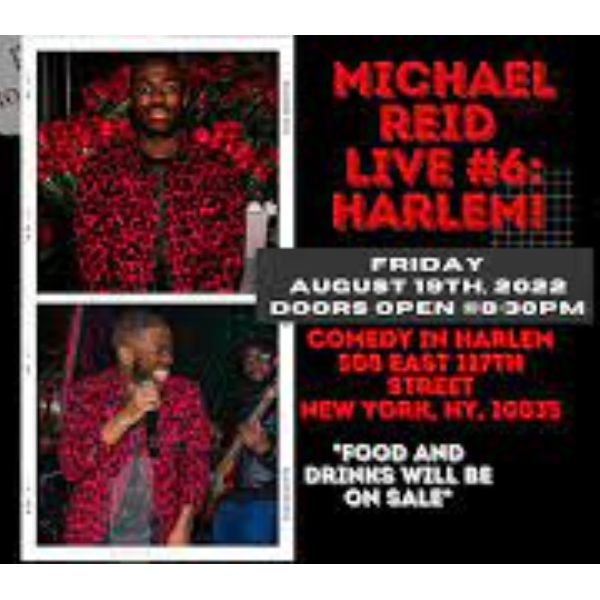 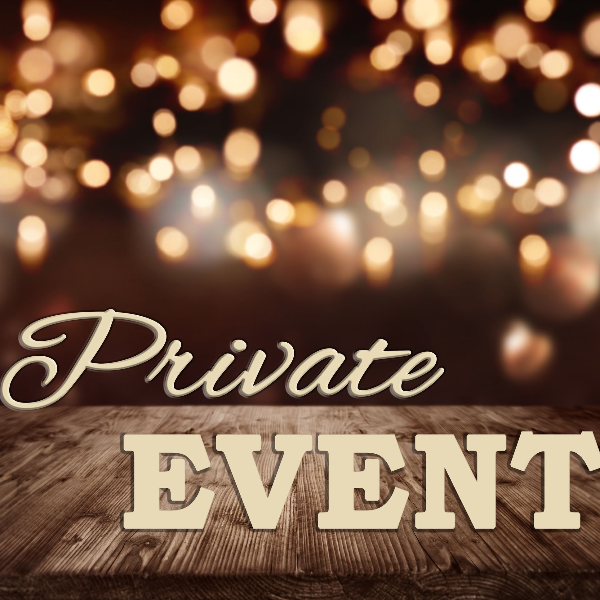 Join Michael Reid for an evening of great vibes and great music! 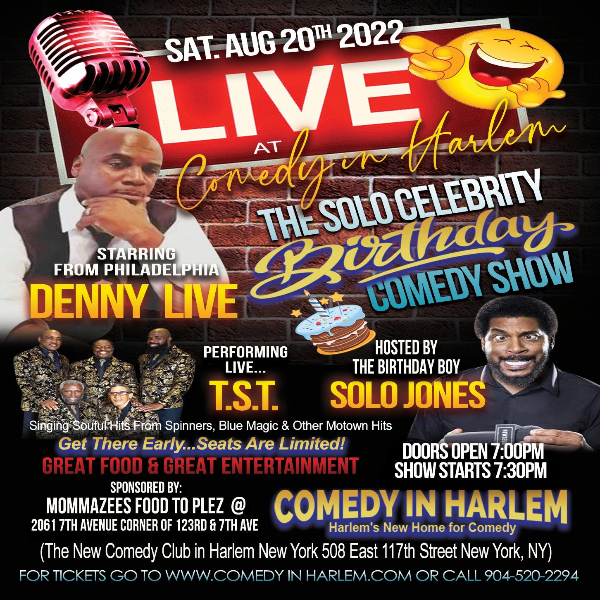 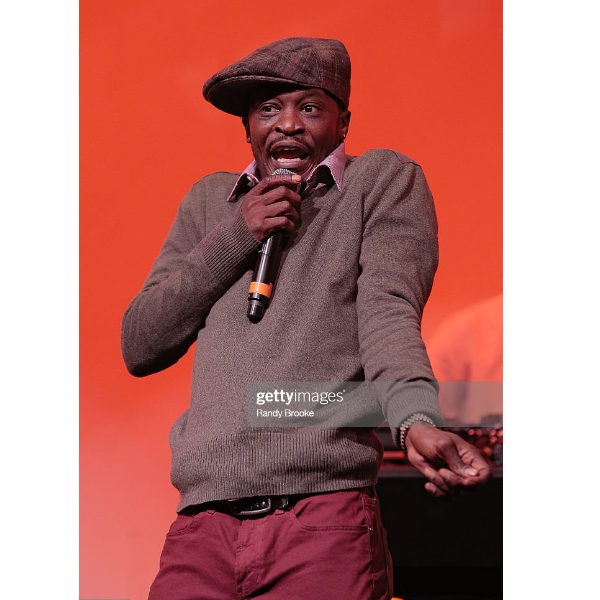 The Living Room with Smokey Suarez

Smokey Suarez hosts his very popular night called The Living Room Comedy show at @comedyinharlem. Doors open at 7pm and show time is 8:30pm. You only need a #coupladollas to get some laughs. 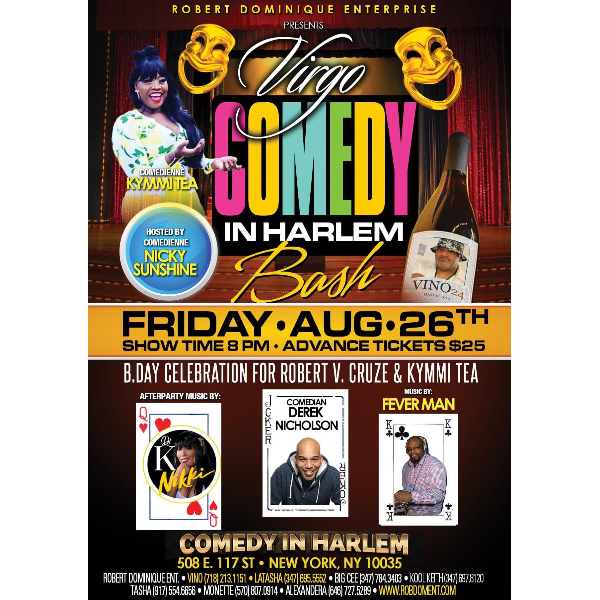 Friday August 26th Robert Dominique Enterprise presents the Virgo Comedy In Harlem Bash featuring Derek Nicholson, Kymmi Tea and hosted by Nicky Sunshine. Music provided by Feverman. Contact us if you would like to celebrate your birthday with us. 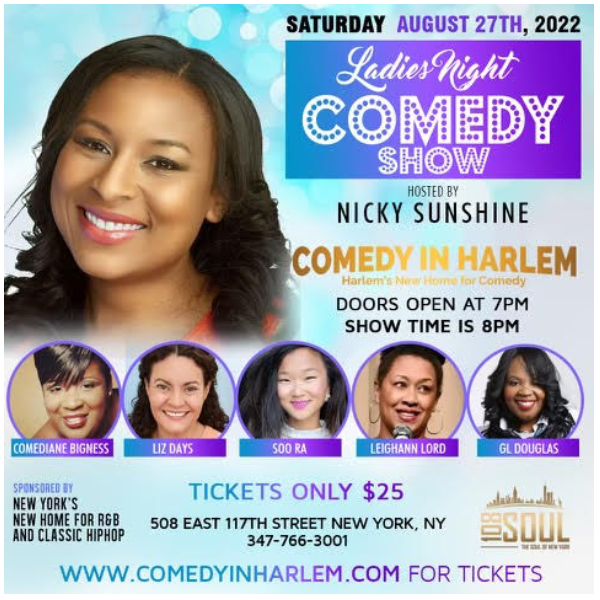 On Saturday August 27th our monthly Ladies Night Comedy Show is back. It will feature an all-star lineup featuring Comediane Bigness, Liz Davis, Soo Ra, Leighann Lord, GL Douglas and is hosted by Nicky Sunshine. Make sure you purchase your tickets in advance because this will sell out. 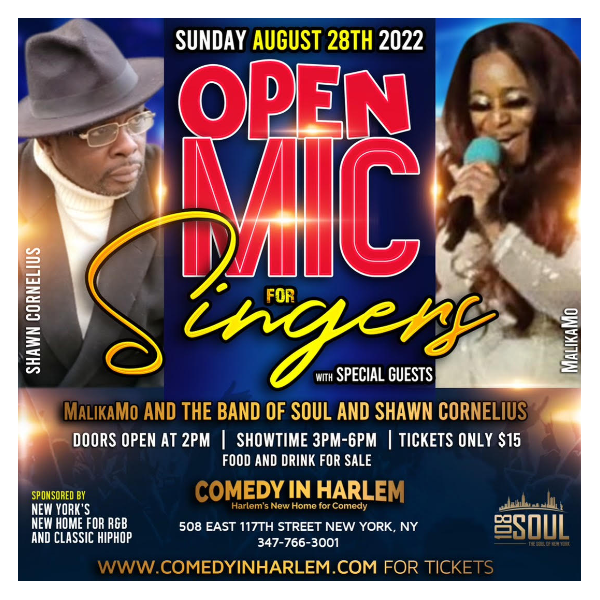 Calling all singers and vocalists who are looking for a great space to perform! Sunday August 28th, Comedy In Harlem plays host to Open Mic for Singers with MalikaMo and The Band of Soul and Shawn Cornelius. Join us for a great afternoon of live music and great performances by some of NYC's top talent. Doors open at 2pm and show time is from 3-6pm. The night is sponsored by 108 Soul, New York's new home for R&B and classic hiphop music. 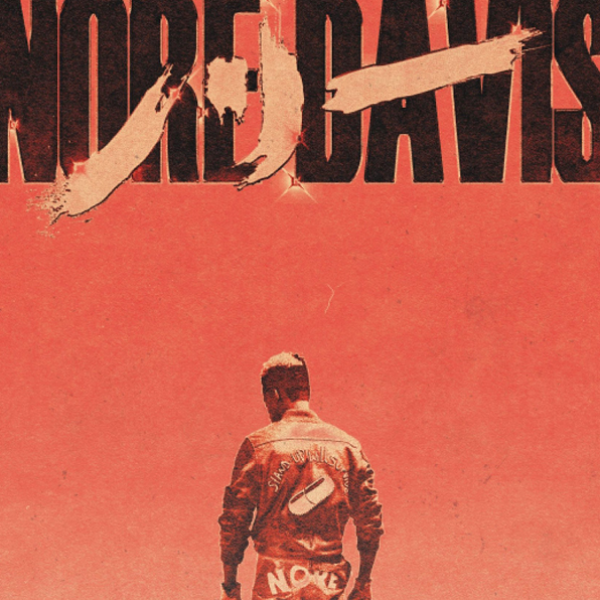 Wednesday August 31st Nore Davis is back for one night only. Fresh off his album release tour, Nore Davis will be headlining Comedy In Harlem. Nore has been featured on Conan, Comedy Central and HBO. This is a night you don’t want to miss. Get your tickets today. This will sell out. 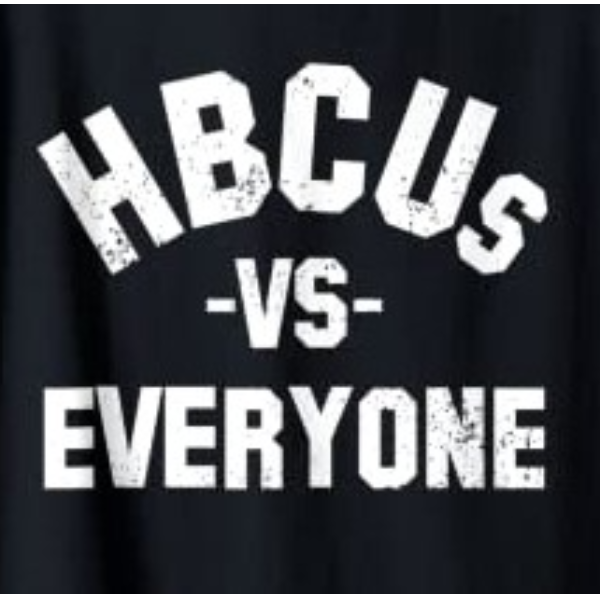 Rep your favorite HBCU for this HBCU vs Everybody comedy show hosted by F. William Samuel. This will be a night of laughter and celebration of local HBCU grads at New York's only Black owned comedy club. 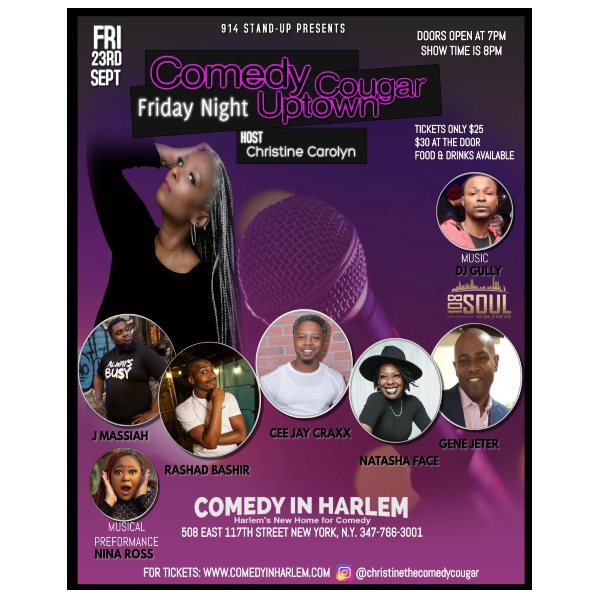 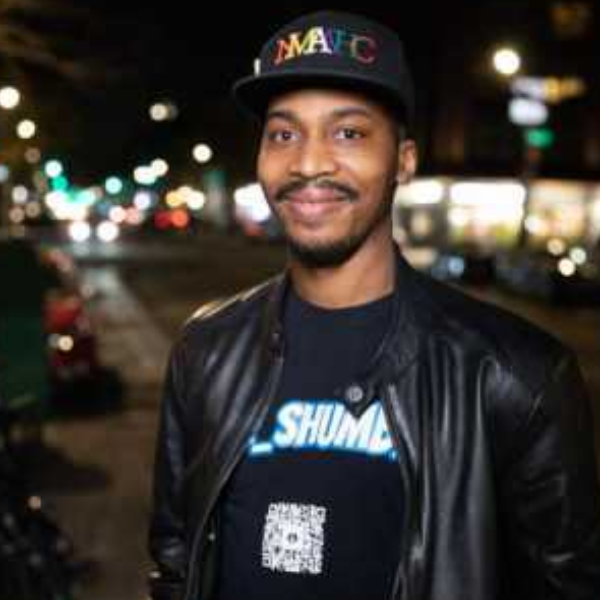 with Christine Carolyn and Rashad Bashir

Christine the comedy cougar presents Comedy Cougar Uptown Friday night with an all star lineup. The night features Natasha Face, Gene Jeter, J Massiah, Cee Jay Craxx, Rashad Bashir and a musical performance by Nina Ross. This is a show you don't want to miss. Get your tickets in advance because this will sell out. 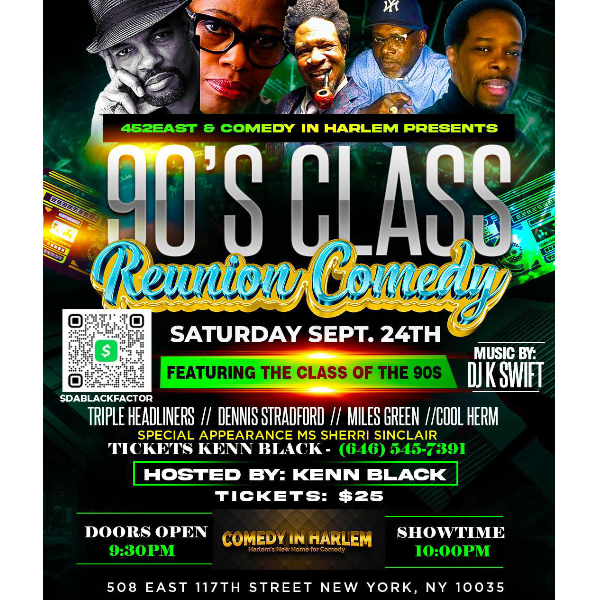 Make sure you are in the house for the 90's Class Reunion Comedy Show happening Saturday September 24th at 10pm. This show will feautre Dennis Stradford, Miles Green, Cool Herm, Ms. Sherri Sinclair and hosted by Kenn Black. This will sell out so make sure you purchase your tickets in advance. 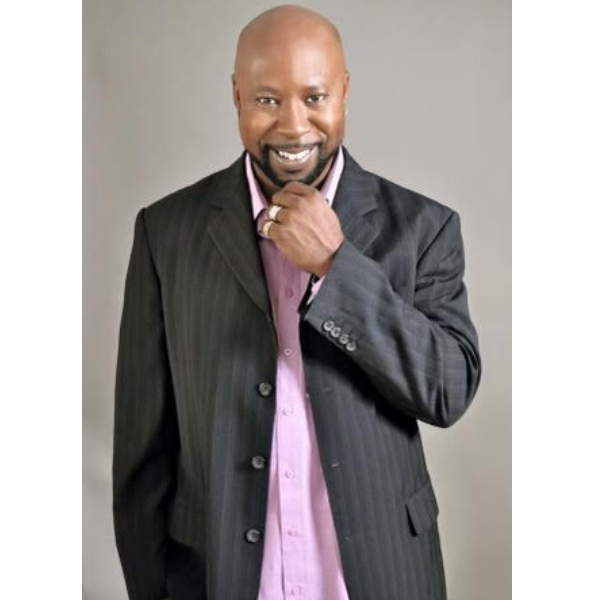 A Night in Harlem

Come out and enjoy a great night of comedy feature Peaches Rodriguez, Comedian Imagine and it is all hosted by "Mr. Butterfly" himself, Kenny Williams. Doors open at 7pm and show time is 8pm sharp. Dinners sold by Beautiful Blessings Catering. 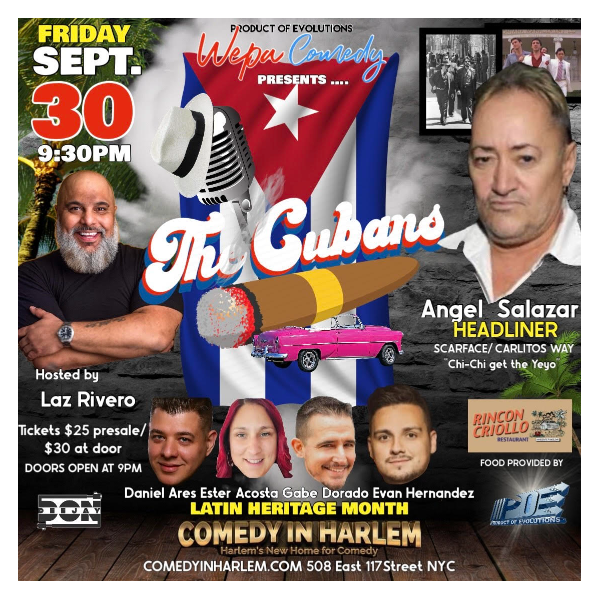 Friday September 30th 2022 we are celebrate Latin Heritage Month in El Barrio East Harlem of NYC at COMEDY IN HARLEM!

Product Of Evolutions & Comedy In Harlem bring you a special night of comedy on an all new Wepa Comedy!

A collective of cuban comedians coming to give you their funny adventures from growing up in Cuba, their families stories to coming to the bright lights of New York City!

with our special guested and Headliner:

A movie and Comedy legend with over 30 years in the business. From Legendary classic movies Scarface & Carlitos Way, his set in comedy is unmatched! For the first time in Comedy In Harlem Comedy Club the Super funny and Gangsta Actor & Comedian Angel “Chi Chi get the Yayo” Salazar!

We are also featuring this collective of Cubanos from all around the New York Tri State area:

We are Hosted by WEPA COMEDY’S in house Cubano himself from Brooklyn, straight off The MARIALITO! 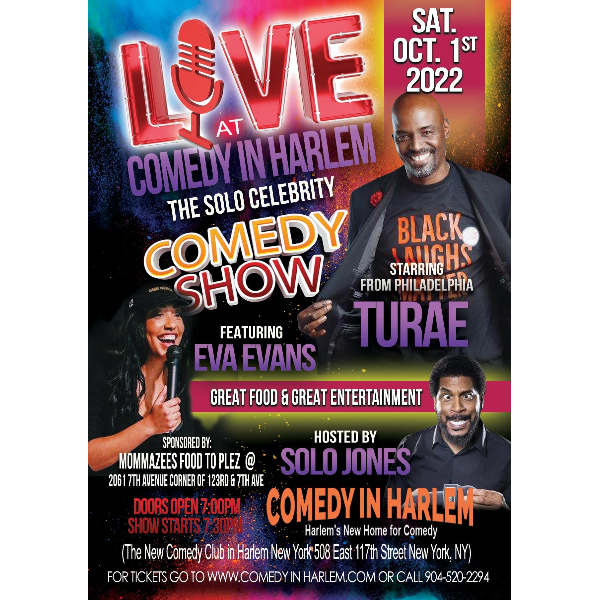 Saturday October 1st comedin Solo Jones plays host to Live at Comedy In Harlem, The Solo Celebrity Show featuring Eva Evans and TuRae. It is sure to be a great night of entertainment and food. The night is sponsored by Mommazees Food to Plez which is located at 2061 7th Avenue in Harlem NYC.