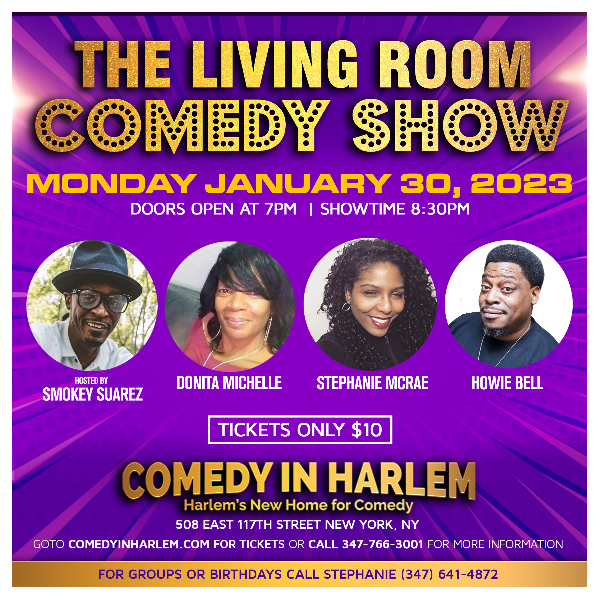 Smokey Suarez hosts his very popular night called The Living Room Comedy show at @comedyinharlem. Also on the show will be Donita Michelle, Stephanie McRae, and Howie Bell. Doors open at 7pm and show time is 8:30pm. You only need a #coupladollas to get some laughs.

Smokey Suarez is one of the top “urban” as well as “mainstream” comedies in America. To the audience he is a raw, authentic, uncensored comedic beast. With his raspy weathered voice and incisive wit, Smokey Suarez is able to blend impeccable comedic timing, clever punchlines, and bold physical comedy into one complete sensational standup routine. To put it short, Smokey is a comedic heavyweight.

Born and raised in the gritty Harlem streets, Smokey evolved into an uncompromisingly bold standup comedian. Let it be known, few can match his skillful wordplay and comedic dexterity. Yet his raw comedic ability never undermines his intelligence. Smokey’s comedy remains poignant, relevant, smart, along with being gut-bustingly funny. And Hollywood has taken notice.


His natural comical gifts on stage have the eye of the best in the entertainment industry. Smokey has been cast in starring roles for the acclaimed Rocafella films, such as “Paper Soldiers”, Death of The Dynasty”, and “State Property 2”.