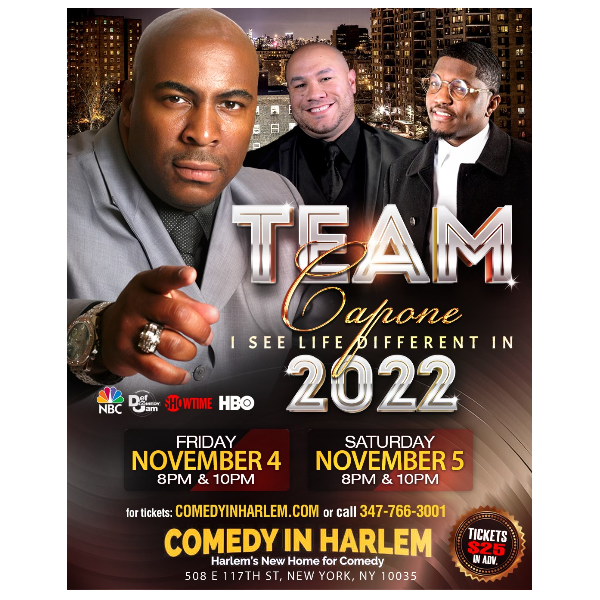 The gangster of Comedy, Capone is coming back to Comedy In Harlem with four shows. Recognized by many as the host of Amateur Night at the Apollo and one of The New York Kings of Comedy, Capone has become a must see comedian in the tri-state area. Grab your tickets now because his last three shows sold out.

Born as Derrick Lee and straight out of the Bronx, NY, he has one of the most exciting careers in comedy. A hustler who trades in his ruggish-thuggish ways to become a successful entrepreneur and later metamorphosis the world of comedy as Capone. Capone didn’t ignore the warning signs that he needed to cease the hustle. His first and last signs came in 1991 after receiving a nine-month sentence. It was then that the soon-to-be notorious funnyman knew the street life wasn’t his calling. “Jail was a blessing for me. At the rate I was going I’d either be spending a whole lot of time there or end up dead”, recalls the comedian of his spiraling street career. With a second chance, Capone left the street life and became a home attendant for the mentally challenged. “It may seem a little far fetched that I chose a Samaritan job, but I’ve always been interested in helping people, especially those who are unable do for themselves”. Although his salary was a far cry from his previous income, he valued his freedom enough to stay on a legitimate path and supplement his wages by moonlighting as a barber on the weekends. It was at his second job, that he began to hone his comedic skills by engaging in intense snap sessions with co-workers. “I was always cracking jokes on the customers or my co-workers so the barber shop served as a sort of comedy haven for me.” It wasn’t until 1992, when a promoter friend of Capone’s challenged him to take his innate talent off the streets and to the stage that his comedy career was launched. “My first show was at Columbia University,” says the comedic veteran of his meager beginnings and who credits his late mother for his comedic sense. “I won the amateur contest and I was invited to perform with the heavy hitters.” Performing with professionals such as Mike Epps, Tracey Morgan and Talent, opened up many doors for the boisterous budding comedian. He immediately ditched his day job after he’d saved his earnings to open his first barbershop. “It was always one of my dreams to have my own barber shop and work for myself.”

Today, the funnyman is the C.E.O. of D.D.L. Enterprises (his initials). He teaches the business of comedy one day per week, at no charge, to up and coming comedians. In addition to his acute business savvy, Capone’s ability to adapt to any audience has made him a mainstay in the comedy arena. He has performed at a variety of venues such as New York’s Caroline’s Comedy Club, Uptown Comedy Club, Boston Comedy Club (noting just a few) and many college Universities. He has toured with N.Y. Kings of Comedy, Russell Simmons Def Comedy Jam in England and Shaquille O’Neal’s All Star Comedy Jam in 2011 and 2012. It is this same universal comedic flair that helped Capone nab his gig as the host of Harlem’s legendary Amateur Night at the Apollo Theatre as well as the majority of the theaters scheduled concerts, “transforming it into a comedic vision”, says the comedian. With his witty style of comedy, the content of his material derives from personal experiences, relationships, children, society, work and ethnicity, admits Capone. Capone notably talented in acting as well, was the main actor for New York Times bestselling author Zane’s HBO film production of her book Sex Chronicles. It’s obvious that he has traveled his path and walked toward the light almost stealthily – when the world of comedy least anticipated his arrival. But he’s here now! Sitting stoically upon his comedic throne, capitalizing on his continued success as he embraces every opportunity to tickle the next funny bone.